Behind Labor’s Tax Increases on the so Called ‘Wealthy’ 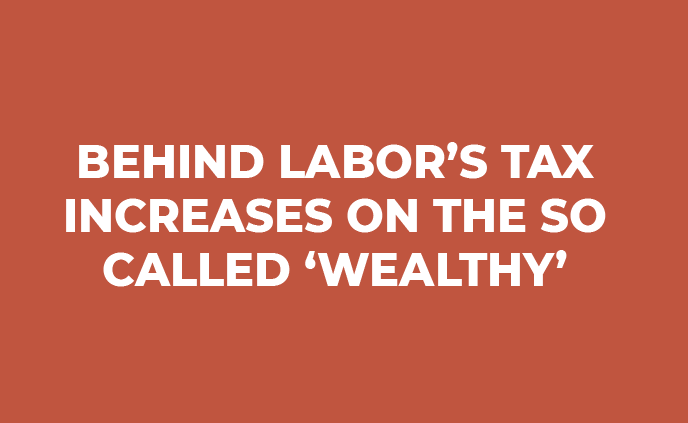 As you have most likely heard in the media, a Shorten/Bowen Labor government want to introduce a range of tax measures, should they win government at the next election on 18 May. According to the these would raise a whopping $387 billion of increased tax revenue over 10 years.

The 2 measures that have had the most publicity are the restrictions on negative gearing and the removal of franking credit refunds. The other not so well-known measures are the reduction of the capital gains discount from 50% to 25%, the reduction in the Division 293 tax threshold from $250,000 to $200,000, the introduction of a 30% family trust distribution tax and the -re-introduction of the budget deficit levy.

Labor have been very clever, as they always are, at creating a perception that these tax increases will only hurt the so called ‘wealthy’. Those who understand how these proposed measures will work, know that this is not the case, with perhaps the exception of the Division 293 tax threshold and the budget deficit levy (depending on your definition of wealthy).

Below I will give you a brief summary on each of the proposed tax increases and how they would work if introduced:

Negative gearing is the term used when an individual purchases an income producing asset, normally real property or shares, and the taxable income from this investment is less than the related tax-deductible expenses, resulting in a tax loss.

Under current rules this tax loss is deductible against the individual’s other income, including employment income. For many taxpayers this can result in quite large tax refunds.

Labor is proposing to limit negative gearing to newly built housing only, meaning that if you purchase an existing dwelling or other investments, then any tax losses incurred cannot be deducted against your other income. Instead these losses will be quarantined to be offset against any future taxable income from that investment.

It is important to note that Labor intend to introduce this from 1 January 2020, and it will be ‘grandfathered’, meaning that any negatively geared arrangements in place prior to this date will still be able to offset tax losses against other income.

The idea behind this measure is to remove the tax benefits to property investors, which in turn will take some heat out of the property market, making housing more affordable for first home buyers.

Sounds good in theory, however the housing markets in Melbourne and Sydney have already come off around 10 – 15% since July 2017 and many market analysts are forecasting a further fall of around 10%. Also, many industry experts expect rents to increase if the restrictions are introduced, making it harder for first home buyers to save for a deposit.

I note that Paul Keating removed negative gearing in 1985, then backflipped and quickly re-introduced it in 1987. There is debate about why Keating decided to re-introduce negative gearing, however many analysts believe it was the strong increase in rents between 1985 to 1987.

In the Australian tax system, we have what’s called dividend imputation. This is the mechanism by which shareholders of a company get a refundable tax credit in their tax return for company tax already paid on dividends that they receive. This was introduced by the Hawke-Keating government in 1987 to avoid double taxation on company profits. When a shareholder’s individual marginal tax rate is low, they get a tax refund for this credit.

It is important to note that superannuation funds in retirement phase currently do not pay income tax and as such receive a 100% refund of franking credits.

Labor wants to abolish these tax refunds and instead only allow the franking credits as a non-refundable tax offset. That is to say they can reduce tax payable but not result in a cash refund.

Sounds reasonable on the face of it, however there are many average income earners out there that are currently relying on these franking credit refunds each year to make ends meet. In fact, when this measure was first proposed by Labor, many pensioners spoke out, forcing Labor to do an embarrassing backflip and exempt anyone eligible for an age pension.

Unfortunately for those in retirement not living off the taxpayer dollar, you are going to be the hardest hit. For example, a Self-Managed Superannuation Fund (SMSF) in retirement phase with $600,000 invested in Australian shares receiving a 5% annual return through fully franked dividends, would stand to lose $12,857 per annum in franking credit refunds. A substantial amount for a super balance of only $600,000.

Reduction of Capital Gains Discount from 50% to 25%

Labor are proposing to reduce this discount to 25%. So, for investments held for more than 12 months you will need to include 75% of the gain as assessable income.

Again, Labor intend to introduce this from 1 January 2020, and it will be grandfathered, meaning any assets purchased prior to this date will still be eligible for the 50% discount.

This may not sound like a lot, however in practice this this could have quite a significant impact on the amount of tax you will pay on a capital gain.

This means that someone with a taxable income of $225,000 per annum, contributing $25,000 per year of employer contributions would pay an extra $3,750 tax per year on their employer contributions. Over a 20-year period of working this will mean a significantly lower amount in super, particularly if you factor in the lost earnings on the annual tax increase. Assuming a 5% return per year, this would mean someone could potentially have $130,197 less in super over a 20-year period.

Quite often a husband and wife will hold investments in a family trust and distribute the taxable income of the investments 50% each to themselves. When they lodge their personal tax returns, they will pay income tax on the trust distributions at their marginal tax rates, utilising their tax free and 19% tax thresholds, as they are quite rightly entitled to do so.

Labor is proposing to tax family trust distributions at a minimum of 30% meaning that the couple in the above scenario will effectively lose their tax-free and 19% tax threshold, and instead have a tax rate of 30% on their first $37,000 of income.

Assuming total taxable income in the trust of $80,000 distributed 50% each, the couple stand to pay a combined amount of $14,304 additional income tax per annum.

It is important to note that some wealthy family groups do use family trusts quite aggressively to minimise income tax. However, they are also used quite legitimately by honest taxpayers for asset protection and estate planning purposes. The proposed changes are inherently unfair to those using trusts legitimately and if introduced will force honest taxpayers to go through the costly exercise of re-structuring their business/taxation affairs, which may increase personal liability risk and have capital gains tax consequences.

Re-introduction of the Budget Deficit Levy

Another point to note is that Labor has committed to re-introduce the budget deficit levy, which will increase the top marginal tax rate for taxpayers earning over $180,000 from 47% to 49%.

The budget deficit levy was a 2% levy added to the top marginal tax rate of 47%, introduced by the Abbott government in 2014 and was only a temporary measure that lasted 3 years and ended back in the 2017 financial year.

As the name suggests it was introduced to help bring the budget back into surplus. Interesting that Labor wants to bring this back now when we are supposedly heading back into a budget surplus in 2020.

In summary, if you own Australian shares or an investment property, are a self-funded retiree, earn over $180,000, or operate a family trust, come 18 May you need to be prepared for significantly higher taxes. Unfortunately, Labor classifies you as the wealthy minority and expects you to pay for their high spending, high taxing policies. If the coalition cannot pull off a miracle and get re-elected, then let’s hope for some sensible, intelligent cross benchers in the Senate who can hold Labor to account and keep taxes under control.